Sustainable fisheries – are we really there? 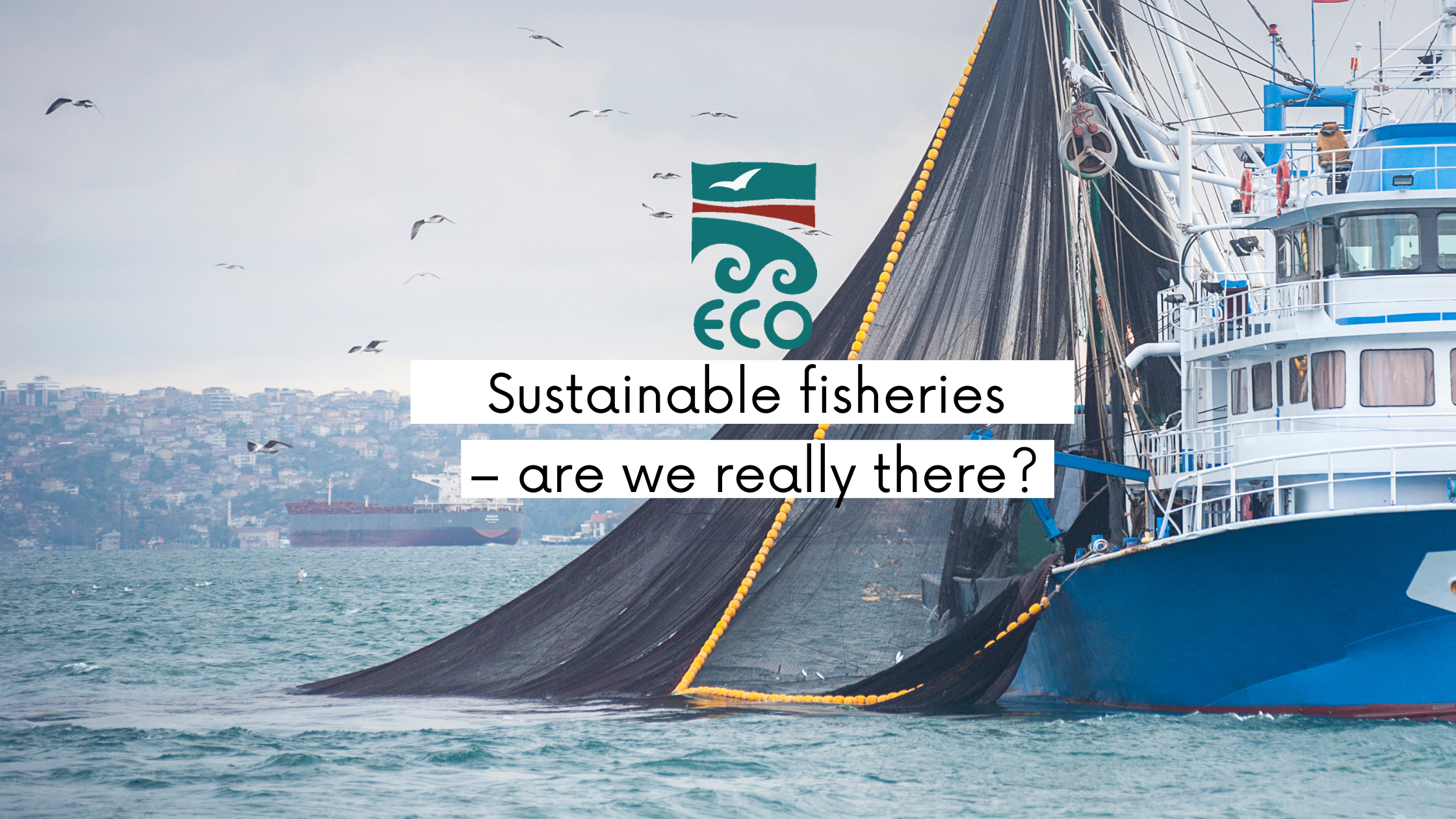 When you consider fisheries and the debate over the impacts of fishing a wider question needs to be asked, exactly what is a sustainable fishery.  Some of these issues have been highlighted by a recent Netflix documentary Seaspiracy including the issue of sustainability, by-catch, and human rights issues at sea.

ECO has worked for years to have ecosystem-based and precautionary fisheries management that keeps stocks abundant and resilient, so that ocean ecosystems and processes are fully functional and productive.  Instead, successive governments have allowed the New Zealand fishing companies to prevail with overfishing, single fish stock management, devastating fishing methods and vaunting of false protected areas, the Benthic (better known as Bogus) Protected Areas that are simply areas that are largely too deep or too barren to be fished.

So how well is New Zealand managing fisheries? The new Minister of Oceans and Fisheries, David Parker, last month made some “sustainability” decisions on a range of fish stocks including five rock lobster stocks, and a number of other fish species.

For rock lobster and most quota species, there are currently no agreed-upon precautionary conservation or target stock sizes for management.  There are some default limits in New Zealand’s initial harvest strategy “standard” but that is over 10 years old and the defaults and the interim provisions in it have become fossilised.  It is also not a real standard under the Fisheries Act and its scope is single species and not ecosystem focused. It also doesn’t consider the environmental principles of the Fisheries Act 1996.

The NZ harvest strategy pays little attention to ecological issues and virtually none of the impacts of fishing.  It is also inconsistent with the guidelines set out in the UN Fish Stocks Agreement to which New Zealand is a party.  The strategy assumes other requirements would be developed for low productivity species (eg sharks) but that has not occurred.

The MPI-Fisheries NZ focuses mainly on avoiding fish stocks getting below 20%  (their so-called “soft-limit”) or 10% (their so-called hard-limit) of their unfished population size at which fisheries are considered for closure.  This is myopic and ECO continues to urge harvest limits to be set to achieve fish populations that are abundant, ecologically functional, resilient to fishing impacts and other human influences.  These include climate change, ocean acidification and changes caused by invasive species.

ECO view is that it is no longer acceptable to claim a stock sustainable on the basis of a harvest goal (i:e a single stock standard that the stock is at or above the level that maximises stock growth (the maximum sustainable yield)  without researched consideration of impacts, functionality in ecosystems, resilience and how other species are affected by fishing. The Fisheries Act provides for consideration of these matters but they mostly receive only lip-service.

The ecological impact of fishing on multiple species and their ecosystems must be considered.  The Antarctic marine agreement, CCAMLR, is a better model than New Zealand’s with a requirement to manage the whole ecosystems and marine relationships. CCAMLR targets are 50% for predator species (eg toothfish) and 75% for prey species (eg Antarctic krill).

In Australia after a long debate, they agreed on some ecologically sustainable principles and has undertaken a detailed review of their harvest strategy. The Australian approach focuses on higher stock sizes than New Zealand and uses 20% (not 10%) of the original biomass as the fishing closure trigger.

So how did the Minister do in his decisions? On rock lobsters the Minister went with the recommendations of MPI-Fisheries NZ but you have to ask yourself are those decisions sustainable? The Minister decided not to reduce the catch limit for the main lobster stock in Northland – this is despite the vulnerable biomass (that is the part of the population being fished) being only 15 to 16 percent of what it was originally. 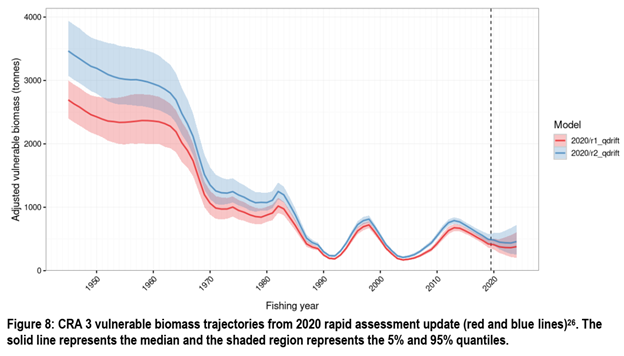 In contrast in the Gisborne-East Coast area the Minister instituted a 14% lobster catch reduction where the vulnerable biomass was estimated at 14 to 15 percent of its unfished size.  In 2020 the previous Minister, Stuart Nash, failed to make a decision to cut the catch limit.

In the Wellington to Hawke’s Bay lobster fishery the Minister agreed to decrease the catch limit by 24%.  For this area, the vulnerable stock is about 13% of its unfished size and could decline to under 10% in the next 4 years.
The Minister also agreed to increase the catch limit for giant spider crab but there is no stock assessment and there is no information on what might be ecologically sustainable.  It is caught by bottom trawlers fishing for squid and other species on the edge of the Snares Shelf – from Otago to South-East of the Snares Island.

Some look to fisheries certification as a benchmark for sustainable fisheries but that has turned out to be largely a failure with much criticism of Marine Stewardship Council’s (MSC) assessment criteria and its client driven processes.

There was a recent rare win for the environment when the MSC certification of orange roughy in Australia was overturned by an independent adjudicator.  This followed an appeal by the Australian Marine Conservation Society and others. However, this success is an exception rather than the rule for anyone involved in an MSC process.

The Hoki trawl fishery certification has been subject to several appeals. The first appeal which involved Forest and Bird and ECO was approved after much delay noting that there were grounds to have repealed the certification.
In response to the industry bias, poor criteria, and barriers in the process, the Make Stewardship Count coalition has called for a range of critical improvements in the MSC and have established a Critical Improvements scorecard.  Amongst the changes needed are ensure that MSC certified fisheries do not destroy seafloor biodiversity and that the MSC Standard is consistent with internationally accepted fisheries management standards.

In the MSC certified Hoki fishery, 71% of the effort is currently in bottom trawls.  It catches about 200 fur seals a year, 300 to 1000 albatross and petrels, half a dozen endangered basking sharks, and an occasional common dolphin and endangered sea lion.  It catches around 130,000 tonnes of Hoki and 80 tonnes of vulnerable species – mainly sponges and some corals. It is made up of two stocks one of which is likely below the target range.  It is MSC certified but is clearly not environmentally sustainable.

We have got to do better. This doesn’t mean avoiding eating fish. But it does mean ending destructive fishing practices like bottom trawling and as Ellie Hooper from Greenpeace put it “protecting key areas of the sea from commercial fishing – areas that are known migratory pathways, biodiversity hotspots and spawning grounds – is one of the major solutions scientists have put forward to save the ocean from collapse.”

ECO looks forward to the Minister of Fisheries and Oceans making a clear commitment to achieving ecologically sustainable fisheries which are precautionary and ecosystem-based. A fisheries management system that protects threatened species and vulnerable ecosystems.  ECO was part of a coalition of NGOs who have called for an end to destructive bottom trawling on seamounts and similar features, and to phase out the use of bottom trawling. It is time to stop habitat destruction in fisheries. Establishing representative marine protected areas and reserves must be a priority with legislation to include EEZ areas like the proposed Kermadecs sanctuary.  It is time for Ministers to join the growing coalition of countries supporting the protection of 30% of the oceans by 2030.
For further information see:
Orange roughy ruling victory for sustainable fisheries and for ocean loving Australians
Make Stewardship Count
In 2019 – Why the Marine Stewardship Council needs an independent review
MPI Fisheries NZ: Sustainability measures set new fishing limits
Greenpeace: Seaspiracy the movie was chilling – but what can I do now?
RadioNZ Fact check on Netflix’s Seaspiracy film about fishing damaging oceans
Newsroom: Choose your kaimoana wisely and Forest and Bird’s Best Fish Guide