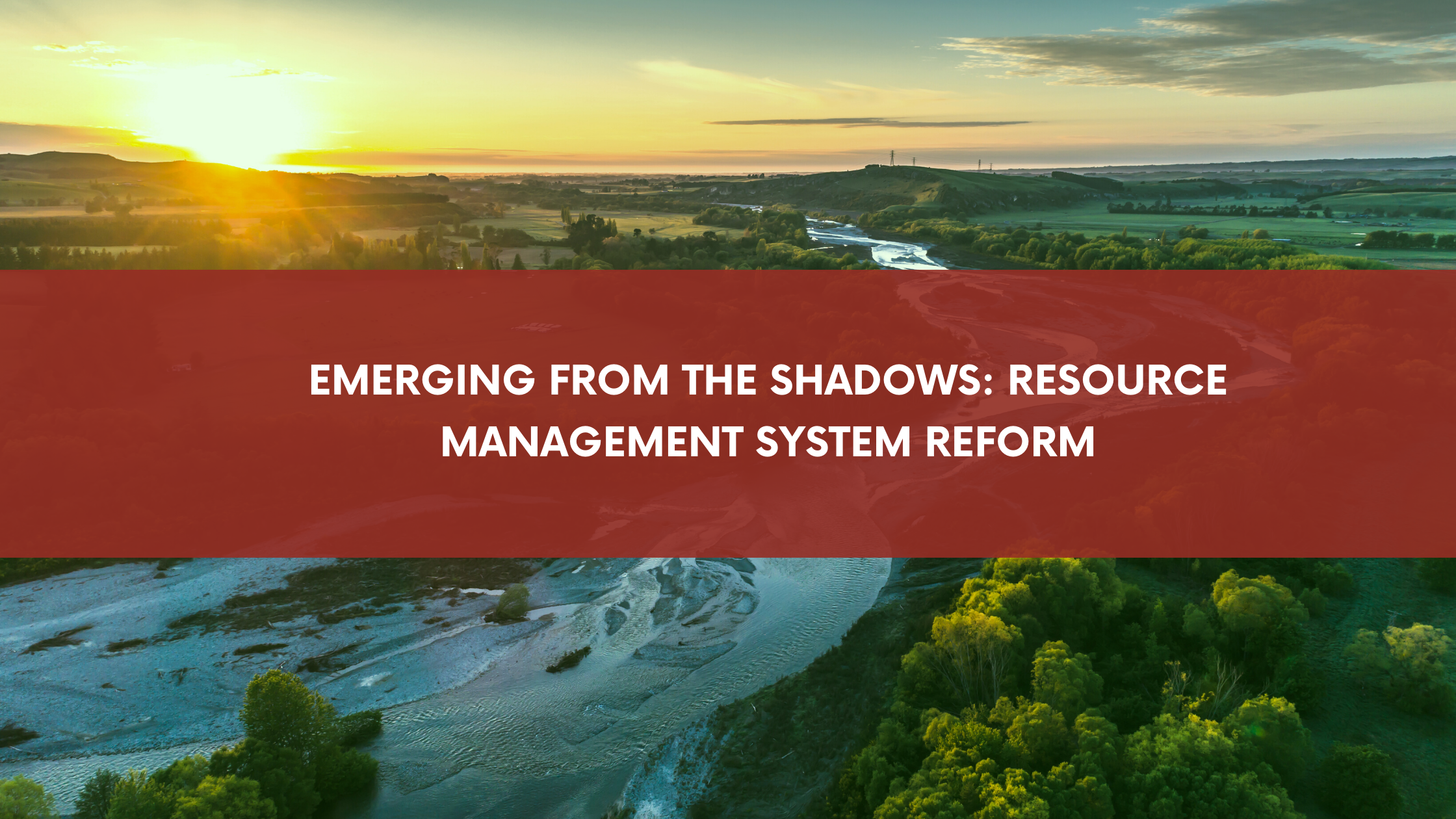 More bits of the government’s Resource Management System Reform has emerged from the shadows.  Information is being fed out but there is no full-scale consultation with the public until the Bill is introduced to Parliament for submissions.  That in ECO’s view is far too late for input that might aim to change some of the fundamental objectives, architecture and concepts.

The Ministry for the Environment (MfE) has published on its website papers called “Our Future Resource /Management System: materials for discussion /Te punaha whakahaere raumemi o anamata”.  When we looked, we could not find it –  it was not in the Consultation section of the MFE website.  Apparently, it was only listed in “publications”.  We have asked MfE to place it under consultations but we provide the link to it here (pdf).

In 2021 the Exposure Draft for the NBE opened for submissions and was considered by the Environment Select Committee.  Its report back made numerous suggestions for clarification and modification.  There were some areas of agreement between the parties on the Committee but some issues which the parties commented on in minority reports.

The government got some pretty thorough advice from the Committee, from submitters and from departments.  Unfortunately, the much-awaited Response by the Government to the Select Committee Report is vacuous.  It simply says that the Government will study the Reports and bring back a modified Bill to the House.

The Exposure Draft did not cover all of what is needed for the fully formed Natural and Built Environments Bill.  More is revealed in the Materials for Discussion papers, along with information on the SPA, and the interfacing system of other elements of the Reform. No drafting of the SPA is available.

It is envisaged that more activities will have “permitted” status and that existing and draft National Environmental Standards and National Policy Statements possibly in modified forms, will be rolled into the National Planning Framework .

Alongside the NBA will sit the SPA.  This is to provide for long term Regional Spatial Strategies (RSS) to reflect what is envisaged for places in the future.  These, in association with “other legislation relevant to land, urban development and the coastal marine area” [I.e. out to 12 nautical miles] will identify areas suitable for development; areas that need to be protected, that require infrastructure, [and/or] are vulnerable to climate change effects and natural hazards.

The SPA will require a Regional Spatial Strategy to be developed for each region and these are to accommodate cross-regional issues.  The SPA will “integrate the Local Government Act 2002, the Land Transport Management Act 2003 and the Climate Change Response Act 2002” – but “substantive changes to these Acts” are not proposed.   The Regional Spatial Strategies are also to integrate with NBA Plans and the National Planning Framework.

The on-paper version of all this looks good as interlocking Lego architecture, but there are many issues to resolve yet and some of these are crucial.

The mechanisms for developing these national and regional plans and regional strategies will mostly rely on “joint committees” of local government, central government, hapu/iwi/Maori and a new “National Entity” which is to have a system oversight and monitoring, including of the Tiriti performance.

Public input is recognised as important, but how is not resolved and may not in the end be provided for.  The local government is told to seek a wide range of views and feedback and to have an independent hearings panel and possibly local plans.

Grounds for Reform
The reforms have been promoted on the basis that the RMA is cumbersome, does not well protect the environment and does not enable housing and infrastructure where it is needed and that hapu/iwi and Maori have not had adequate input. The need to reduce greenhouse emissions is noted but the government’s decision to delay implementing the already passed requirement to consider the greenhouse gas emissions of projects shows that this is not in fact a Ministerial priority.

The concerns listed also include the lack of integration across the system, resulting in inefficiencies, delays and costs.

Objectives of the Reform
The Objectives for the reform have some good elements but are of considerable concern in that there is no clear hierarchy amongst them and there are some ambiguities.

Cabinet decided not to make the protection of the environment a binding constraint and the objective of restoring the environment is qualified by “where necessary”.  When ECO asked what the necessity test would be, we were told this had yet to be decided and that the exact wording of the Objectives is not settled (see draft below).

The Environment Select Committee recommended a clearer formulation so that the primacy of the environmental requirements and goals takes precedence over the other objectives – but Cabinet may not have agreed to that.

The Objectives have a distinctly anthropocentric focus.  The requirement to “enable development within biophysical limits” is welcome for its recognition of biophysical limits, but it fails to shift thinking from the development and growth paradigm to “the economy of enough” even though well being is recognised.

Te Tiriti provisions are discussed as are what will be “hapū/iwi/Māori” roles in the new system but te Tiriti observance is to “give effect to the principles of Te Tiriti”.  Māori are likely to bridle at the lack of commitment to give effect to te Tiriti itself.  How Māori are to be selected for the National Entity and the joint committees is an unsolved puzzle, and is even more difficult than the task of selecting the members of the regional joint committees.

Environmental Limits are to be set as minimum states of the environment and maximum permitted harm or stress on the ecological integrity of the natural environment and human health.  How the process will avoid impacting down to the limits is unclear.

Targets are to be set for natural and built environmental outcomes, cultural values, natural hazards and climate mitigation and adaptation.

The Ministerial Oversight Committee of the RM Reforms is chaired by the Minister of Finance, NOT by the Minister for the Environment.  Many other Ministers are on the Committee and this may account for the murky objectives and conflicting goals and mechanisms.

In the final bullet point objective, the insertion of “appropriate” local input and similar provisions elsewhere gives no assurance that there will be any full public participation.  There are some references to “local voice” and such such but the mechanisms for this are unformed.  There is little more than a hand wave on public input, though there might be local committees and input to local government as a means to provide a “local voice”.

Plans developed by committees of local and central government and Māori will be contestable in front of independent hearings panels, but appeals will not be allowed except on points of law.

The key to these reforms is that the government decided to shift public participation away from the consenting end of RM System processes towards the plan stages. The government has also seemingly decided to as far as it can, leave the public out of future Reform development processes except at the legislative submission stage Parliamentary Committee stage.

In the preparation and consultation of the papers (November 2021), the government consulted with central and local government and Māori leaders, but NOT the public.  Businesses and a handful of environmental organisations had input, but provision for an “information session” with environmental organisations was scheduled just before submissions close on 28 February 22.

Disconcertingly, officials say that they are tasked not to remove conflicts with clearer prioritisation than the Objectives and other elements, but rather to provide for mechanisms (e.g. joint committees), plans etc, to resolve conflicts.  This is a step backwards from the RMA and will likely mean that those with the deepest pockets with be the ones who can wrangle for the outcomes that they want.

Far from making the system more effective, efficient and less complex, the lack of clear prioritisation and the weasel words and phrases will lead to a morass of ambiguity, conflict and legal contests.  Those without the necessary access and resources will be left to resort to direct action to protect the environment.

The Objectives require that development must protect the environment and be within biophysical limits.  How those are identified is yet to be determined.

Alarmingly, particular consents are explicitly not required to comply with the Objectives – rather that is left to the Plans and strategies.

The papers contain far more than can be conveyed here, but there is a huge amount still to be shaped up and decisions made with great haste, considering the magnitude of issues to be resolved.

The documents can be found on MFE website (pdf)