ECO Vice-Chair and long-time Antarctic campaigner Cath Wallace previews the new protections for the Antarctic which come into force this Friday, 1st December:

This major gain of marine protection in the Southern Ocean was agreed at the October 2016 Antarctic marine convention (CCAMLR) meeting.  It reflects the combined efforts of New Zealand and the United States and many supporters globally.

The proposal for a series of 19 marine protected areas in the Southern Ocean was originally developed and campaigned for by the Antarctic and Southern Oceans Coalition (ASOC) with the Antarctic Oceans Alliance.  ECO is a long-term member of both organisations.  These introduced the idea of protection of the whole of the Ross Sea, drawing on science by a scientific group led by Halpern that showed it to be the most intact ocean ecosystem left globally.

The Convention on the Conservation of Antarctic Marine Living Resources, (CCAMLR) embarked over 10 years ago on a process to establish a network of representative marine protected areas.  This network has so far only got two MPAs including the Ross Sea.

The Ross Sea MPA is large, though not as big as proposed by ASOC because of pressure from fishing interests and governments that did not want to protect the whole area.

Of the area protected over 1.12 million square kilometres will be fully protected from commercial fishing with the remaining protected area is designated as special research zone (SRZ).  Some areas outside the MPA are open to commercial toothfish fishing, including some that were previously not open for this purpose. 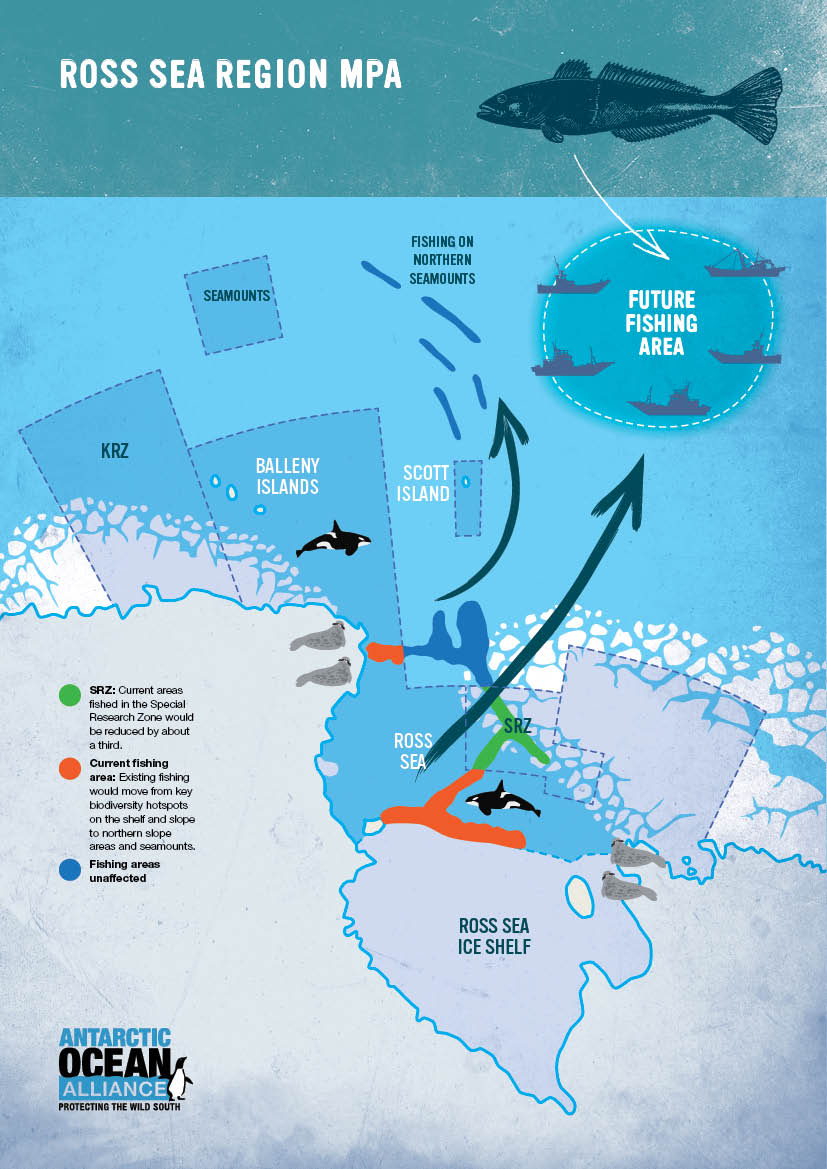 It is disappointing that so-called commercial “research fishing” has been allowed in the Special Research Zone and that the northern tooth fish spawning banks and the eastern areas of the Ross Sea are not better protected.

Another disappointment is that the new MPA expire in 35 years rather than being made permanent. Let’s hope future generations ensure that CCAMLR will recognize the value of protecting this area and will renew it in 35 years.

The Ross Sea is a special place

The Ross Sea was identified by a major international scientific study as the least modified marine ecosystem on earth. It is clearly the most important to protect.  The area includes habitat for penguins and other seabirds, killer whales, seals, many kinds of fish but particularly toothfish, and the fantastic corals, starfish, krill and bivalves, and other astonishing sea creatures that live in the Ross Sea.  The MPA will allow a great chance of surviving and functioning as an intact ecosystem with this decision.

The Ross Sea is home to 38% of the world’s Adélie penguins, 26% of Emperor penguins, more than 30% of Antarctic petrels, 6% of Antarctic minke whales, and perhaps more than 30% of “Ross Sea” type killer whales. Moreover, it has the richest diversity of fishes in the high latitude Southern Ocean, including at least seven species found nowhere else.

It is time to celebrate the combined efforts of the Antarctic and Southern Ocean Coalition (ASOC), the Antarctic Ocean Alliance, and their member organisations and supporters, and the scientists, officials, politicians and diplomats for achieving a major conservation success with protection or safeguarding chunks of the Ross Sea in Antarctica.

An essential ingredient was sustained public pressure and the tenacious work of the non-governmental organisations who launched the idea, including ECO. There have been years of effort and careful diplomacy by New Zealand and the USA to achieve the result.

Particular tributes are due to movie maker, Peter Young, of Fisheye Films, who made the Last Ocean movie which raised awareness immensely.  This result is a joint effort.

ECO’s Barry Weeber was at the CCAMLR meeting that achieved this result, and he has worked for years for this result as have many others.

This year CCAMLR Scientific Committee agreed to a substantial research and monitoring plan for the MPA.  This plan was developed through joint effort of New Zealand, US and Italian scientists.

Progress on additional MPAs have been very slow.  Frustratingly, the proposal from Australia and the EU for protection of East Antarctic areas again failed to gain consensus at this years CCAMLR meeting. ECO hopes that careful diplomancy will see the proposal agreed at next year’s meeting.

Further proposals are being developed.  Active efforts are being undertaken in two areas -, the German efforts in the Weddell Sea, and by Argentina and Chile in the Antarctic Peninsula.

Greenpeace has launched a campaign to help support further Antarctic MPAs, in particular in the Weddell Sea and around the Antarctic Peninsula.  Greenpeace is undertaking an expedition to the peninsula this summer which will include the use of a two-person submarine to help document these special areas.

Greenpeace was a key participant in the campaign to stop mining in Antarctic in the 1980s and early 1990s.  It operated a year-round base (World Park Base) at Cape Evans in the Ross Sea from 1987 to 1992.