PMs Science Report on Fisheries is a missed opportunity

The Report on commercial fishing by the PM’s Chief Science Advisor, Dame Juliet Gerrard, was made public in March.  The report came out of a process which was co-chaired by a representative of Seafood NZ, the commercial fishing organisation.

The recommendations are rather limited with the key element being a suggestion for an “Oceans Strategic Action Plan for 2040..”  But this isn’t the report that will result in precautionary fisheries management, protection of vulnerable marine ecosystems, or implementation of the Fisheries Act or observing our international obligations.

Dame Juliet’s personal foreward noted that as to “views of how environmentally sustainable commercial fisheries are in 2020, nearly every stakeholder we talked to agreed we could do better”.  She also noted “the poor relationship and lack of trust that characterise the sector”.  Its surprising she didn’t realise this when she started the process and established the limited cast of her advisory group. The membership of the advisory group can be found here. 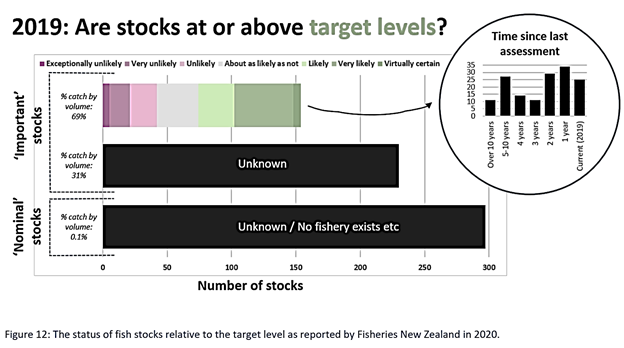 There are some major omissions in the report which may in part be due to the limited terms of reference and the limited representation on the working group she established.  The Seafood Industry has welcomed the report.

Consideration of New Zealand’s international obligations relating to fishing, a requirement of section 5(a) of the Act is barely addressed.  Without the UN Convention on the Law of the Sea (UNCLOS) we wouldn’t have a 200 nautical mile Exclusive Economic Zone and its provisions which are different from those in our territorial sea.  Under UNCLOS states have an unqualified obligation to preserve and protect the marine environment (Article 192).

The report isn’t a prescription for effective fisheries management or for how to get more science on the large amount of unknowns in the managing fish stocks. The problems of the current fisheries costs recovery regime which has halved fisheries research in over 20 years gets little attention.

The report notes that setting aside 300 “nominal stocks”, “around a third of the commercial catch volume is made up of stocks that have never been assessed” (see figure).  This “leaves a high uncertainty around the size of the stock and the level of impact commercial fishing may or may not be having”.  In addition, many of the stocks that have been assessed, involve assessments which are five or more years old.

The report notes that key sections of the 1996 Fisheries Act have never been applied: “There have been no habitats of particular significance for fisheries management defined or applied in the approximately 25 years the Fisheries Act 1996 has been in place.”

In her foreword, Professor Gerrard, has “challenge[d] the Minister and the regulator to strengthen their arm and use these provisions to catalyse change”.

Internationally New Zealand has agreed under the Convention on Biodiversity Aichi biodiversity targets and in Sustainable Development goals to “By 2020 sustainably manage and protect marine and coastal ecosystems to avoid significant adverse impacts…” (Target 14.2).

Change is definitely needed in fisheries management if Aotearoa-New Zealand is to protect vulnerable marine ecosystems, at risk biodiversity, and consider the oceans as a whole rather than just an unlinked bunch of fish stocks.

For further information see: PM Science: The future of commercial fishing in Aotearoa New Zealand – there are three documents the full report is 30 megs and the Key messages report (5 megs)
MSN-Newshub – Commercial fisheries report reveals how ‘frighteningly little’ we know about ocean